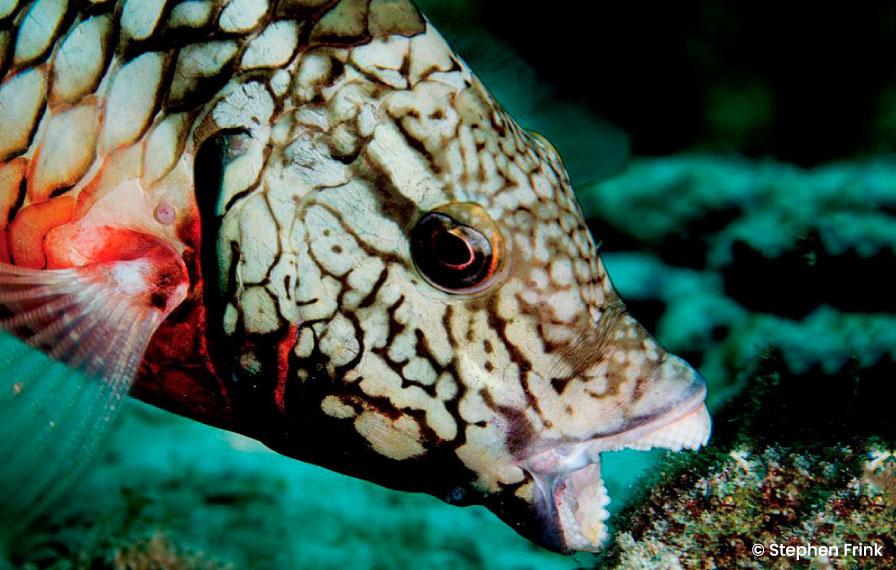 Get a load of those chompers! Why Parrotfish are Important

That’s a parrotfish getting ready to take a bite of algae growing on dead coral. It’s easy to see how parrotfish got their name – from that parrot-like beak, of course.

Parrotfish teeth are incredibly strong. They can exert 530 tons of force per square inch, roughly the weight of three blue whales pressing on the area of a postage stamp!

The dead coral that this “excavator” type of parrotfish inadvertently bites off with the algae gets ground up by a second set of teeth in the fish’s throat and is pooped out as sand. Imagine, some parrotfish create as much as 900 pounds of beach sand each year, simply by chomping on dead coral.

Parrotfish are great at keeping the ocean floor clean of algae, so that corals can grow. However, it’s recently been discovered that they can be a problem when scientists attempt to restore reefs by putting new corals into the ocean.

Florida has the only coral reef in the continental United States, and one of the largest barrier bank reefs in the world. It extends about 360 miles along the state’s east coast. Since 2014, stony coral tissue loss disease (SCTLD, for short) has infected about half of the coral species in Florida that have a hard, calcareous “stony” skeleton.

The disease started near Miami. Since then, it has spread, north and south, over the entire length of Florida’s reef – and even into more than a dozen Caribbean countries.

Scientists still haven’t identified the precise cause of the disease, but it appears to be bacterial or viral in nature. To save corals from SCTLD, divers have removed many healthy corals ahead of the disease’s advance, and scientists have been keeping them alive in laboratories.

In the last five years or so, scientists have also learned how to induce corals to spawn in the laboratory by mimicking the environmental conditions and lunar cycle in the months of August and September, when most stony corals sexually reproduce in Florida. That’s right, most stony coral species have male and female genders! They release eggs and sperm that combine in the water currents, settle on the ocean floor, and become new coral colonies.

The hope is that Florida’s decimated reefs can be restored by putting the rescued corals and juvenile corals, reared in the laboratory from spawn, back into the ocean after SCTLD abates, or after a cure for the disease has been found.

Also, quite by accident (when a coral stuck to the bottom of his aquarium happened to snap off) a scientist discovered that coral fragments grow up to 40 times faster than the large coral from which the fragment came. A bandsaw is now commonly used to slice up corals before putting them into the ocean. The rapid growth of coral fragments has the potential to replenish the reefs at a much faster rate than large, intact corals possibly can.

Of course, juvenile corals and fragmented coral pieces are small. By a lousy twist of fate, when they are transferred to the ocean, parrotfish quickly target them and take bites with their powerful jaws, which may either dislodge the small corals from their attachments on the ocean floor, or cause mortal wounds, from which a larger coral could have recuperated.

Why parrotfish behave this way is still a mystery. It may be that they are territorial by nature and react aggressively to new objects in their environment, or that they find the new corals somehow tastier than those that live naturally in the ocean.

Ironically, parrotfish normally feast almost entirely on algae growing on dead coral, not on pristine live coral. Parrotfish found in Florida and the Caribbean take fewer than 1 bite out of 20 on the live corals naturally found in the ocean. What’s up with the parrotfish obsession with newly transplanted corals? Nobody has figured that out yet.

To deal with the parrotfish problem, scientists have tried to protect the juvenile corals and coral fragments by placing spikes around them, or by covering them with a cage. PVC pipe and steel devices have typically been used.

Unfortunately, algae grows quickly over these structures, which blocks the light that corals need to survive. Divers then have to scrub the protective structures every three months or so just to prevent algae from taking over – that’s quite labor intensive, as you can imagine. Worse still, if the protective structure is removed too soon, parrotfish often zoom over and start biting the newly exposed corals.

Another critical observation is that parrotfish stop biting unprotected corals in as little as one week, or after about three months. They either become used to the new corals within their environment, or the coral transplants gradually adapt and become indistinguishable from corals found naturally in the ocean. Bottom line: These protective structures aren’t needed for very long, but they can’t be removed suddenly, either.

The discovery that parrotfish attack transplanted corals in this manner has greatly hindered reef restoration efforts in Florida. To rebuild coral reefs, after the devastation caused by SCTLD, it will be necessary to relocate tens of thousands of juvenile and fragmented corals to the ocean. Any approach that protects the transplanted corals and obviates maintenance and checkups by divers would represent a huge improvement in reef restoration efforts.

Dr. Kirk Dotson, the founder and president of the Reef Discovery Center (RDC), is working with Dr. Abby Renegar, Research Scientist at Nova Southeastern University (NSU) Halmos College of Arts and Sciences, and NSU graduate student Kyle Pisano. They designed a structure that prevents parrotfish from biting newly transplanted corals, but that should gradually fall apart before algae accumulates on it and after the parrotfish’s eagerness to bite wanes.

Dr. Renegar is also an RDC board director, and Mr. Pisano an RDC advisor, so a strong and growing relationship exists between the RDC and NSU.

The three researchers have concluded that a biodegradable plastic called polyhydroxyalkanoate (try saying that five times very fast!) would be a good option for constructing the protective structure and are using tubes made of this material as a “fence” around transplanted corals to prevent parrotfish from getting to them.

The rate at which the tubes degrade on the ocean floor is defined by their thickness – the thinner the tube, the faster they fall apart. It’s a Goldilocks situation! Adjust the tube thickness to make the “fence posts” fall apart in the ocean propitiously. Not too slow, not too fast … but at just the right time.

Will the biodegradable fence that the research team designed really work for this complicated problem? Time will tell! Experiments at NSU are underway to find out. @NSUFlorida