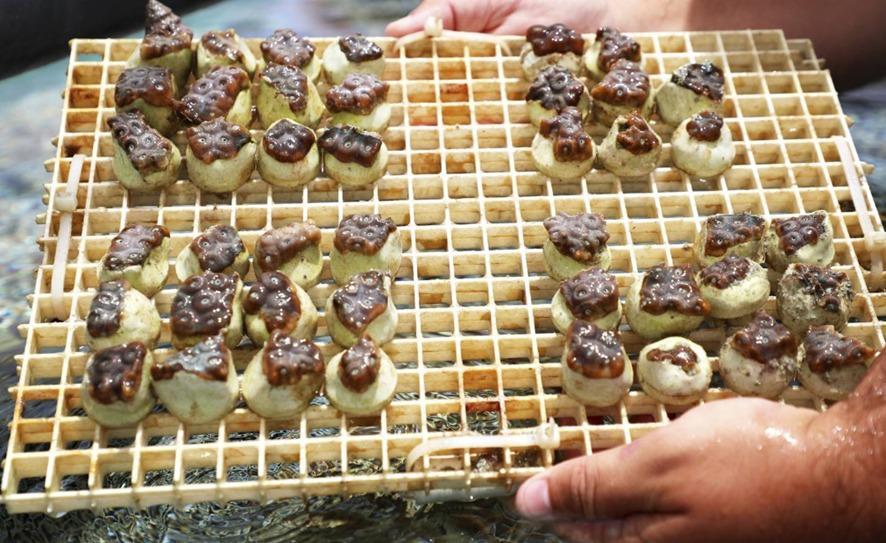 DANIA BEACH — In a 600-gallon tank overlooking Port Everglades, small pieces of brain coral and massive star coral grow serenely below the surface of the water. Although some of these pieces are the size of a quarter, all 2,376 fragments at this nursery could make a difference.

“These are what we call corals of opportunity,” said Kyle Pisano, the onshore coral nursery manager. “Corals that have been dislodged from the reef in some way, whether from anchors or storms or something else.”

They bring these corals of opportunity, which would otherwise die, to the nursery to try to grow more coral, in an effort to strengthen Florida’s struggling coral reef populations.

Researchers at Nova Southeastern University are propagating and studying coral at their Oceanographic Campus in Dr. Von D. Mizell-Eula Johnson State Park in Dania Beach. For the past 10 years, they have been growing coral at this nursery to preserve genetic diversity, create more coral for outplanting in the ocean and save coral from disease.

In 2019, NSU researchers began the Noah’s Ark project in a coordinated effort to save corals at risk of stony coral tissue loss disease. This disease has swept Florida and the Caribbean, resulting in large die-offs.

In two years, the researchers rescued 980 corals, called naive corals, before the disease infect them.

“Initially, the efforts were focused on collecting corals ahead of the moving disease front, taking them out of the oceans and saving them from being affected by the disease,” said Dr. Abby Renegar, a researcher scientist working on the project.

Now, the researchers have transitioned more into more broadly preserving corals, including corals that survived disease. They’re studying and propagating those corals in the hopes that their genotype will breed more disease-resistant corals.

“We’ve sort of moved our focus with the capability of the nursery that was established during the initial response to stony coral tissue loss disease to start providing a home for endemic corals for many different reasons,” Renegar said.

In the past year, NSU’s nursery has produced 3,605 fragments of coral, of which a third have been returned to the reefs.

Some corals, such as the ones NSU received during the Noah’s Ark project, won’t be outplanted. Instead, they’ll be preserved in labs or aquariums, or studied for research. Pisano said they partly function as a seed bank.

One of the most impressive specimens at the nursery is a meter-wide brain coral that the researchers estimate is roughly 150 years old, said NSU graduate student Katrina Smith. They’re waiting for another expert to give the exact age, and when they do, they might split it into smaller pieces, essentially in a small-scale cloning process.

Once the researchers decide a coral will be fragmented, they often use a bandsaw or tile saw to split it into pieces, taking care to protect the coral as much as possible. Then the specimens go in large tanks, where they receive artificial saltwater that is mixed on-site using salt from their 900-pound barrels. If the corals need additional nutrients, the nursery researchers may sprinkle a plankton mixture over the coral with a turkey baster.

Many corals must be quarantined for 30 days upon arrival if they aren’t immediately outplanted, and they require veterinary checks if they are at the facility long enough. These corals are studied and documented, and many return to offshore reefs.

According to the Environmental Protection Agency, 25% of marine life depends on coral reefs at some point in their lifetime. Reefs are vital in medical research and bring in tens of billions of dollars worldwide from diving, fishing and tourism. They also serve as barriers against storms.

Coral is in danger right in NSU’s backyard. Smith estimated that roughly 40,000 corals in Port Everglades are at risk because of construction on the port meant to deepen and widen it. Some of these corals will likely go to NSU’s nursery, but it can’t accommodate 40,000 corals. Bigger solutions are needed, Pisano said, and he thinks they’ll happen in time.

With disease, ocean acidification, water quality issues and ocean warming, among even more factors, Renegar said it can be hard to pinpoint exactly what is causing die-offs. That can make creating solutions more challenging, but the team is doing what they can to preserve coral with what they have.

“A lot of what we do is not necessarily just Band-Aids for the situation,” said Matthew Rojano, a graduate student working on the project. “They are pretty helpful in preserving the genetic pool that these corals are propagating. But if you don’t fix the underlying issues, then putting them back out isn’t really going to do much good.”